Why Independent Artists Need to Get on Mobile Live Video Now

You may have been noticing those Facebook Live notifications popping up more frequently. If not, you will soon enough.

The hot new trend in the social media world right now is mobile live video. For indie artists, its use is definitely picking up momentum. You might be thinking, why should I care? Well, let’s take a quick step back to see what’s been happening with mobile live streaming.

Mobile live video first started with the apps MeerKat and Periscope in 2015. Although Meerkat came out first, it couldn’t keep up so it had to move into a different market. Periscope was later purchased by Twitter.

Facebook, the world’s largest social media network with over 1.5 billion active users, jumped in with Facebook Live shortly after.

Youtube recently announced it’s own live mobile video function to be built into its app. As I write this, only a select few Youtube users will have this feature as they continue to test it before releasing it to the public.

Even Tumblr is getting in on the action with their announcement.

Although Snapchat isn’t technically mobile live streaming, its growth has been unbelievable the past few years. This helps to support the increased demand for unpolished, “in the moment” video content. More people are now using Snapchat than Twitter, Pinterest and Linkedin.

When you have all these social media giants getting in on the live mobile video, it’s a huge sign that you need to consider incorporating it into your social media strategy. At the very least, experiment with live mobile video. Getting exposure as an independent artist is tough so it’s important to take advantage of new trends before everyone else.

What is Mobile Live Video?

In case you’re not familiar with mobile live video, it’s the ability to livestream or broadcast video to an online audience through an app on your mobile device.

Live streaming has been around for a while, but it was mainly through a webcam on a desktop or laptop. With nearly 2 out of 3 Americans owning a smartphone, this function has now carried over to mobile devices.

Here’s why it’s such an attractive tool for independent artists:

The key to mobile live video is real time engagement. Your online audience has the ability to interact and make comments live while you are streaming. This function helps to create deeper personal connections with your fans. Without this real-time interaction, it’s really no different than just uploading a video.

Personally, I know I get juiced when an artist I like and respect interacts with me on social media. To be able to do it live is taking fan engagement to the next level.

It’s becoming clearer that video content in general is going to dominate in the future. In 2015, mobile video traffic accounted for 55% of total mobile data traffic. That’s a pretty high number, and it’s only going to increase. A recent study by Cisco states that three-fourths (75%) of the world’s mobile data traffic will be video by 2020.

With that being said, it makes sense for the big dogs in social media to dive into mobile live video. Here’s what Facebook said about Facebook Live in a blog post:

For musicians and artists, it offers another medium to catch people’s attention and provide more exposure. To me, it makes sense to learn how to live stream and get comfortable with it now. There’s obviously a huge potential that Facebook and Google see in this so you should too.

Just remember, don’t just live stream any random event. You should have a clear plan and strategy of what you want to film. Use it sparingly, as long as you can provide good engaging content. Using live video for captivating events keeps your video special. Also, you need to give live streams time to build up momentum, so don’t stream for only a few minutes and stop. I would say 10 – 15-minute sessions would be ideal.

Hopefully, you’ve been convinced enough to at least test it out with your own fans. Here’s an overview of which platforms to focus your efforts on as an independent artist:

When Facebook first rolled out mobile live streaming, it was exclusively for celebrities and influencers. Now anyone can use it, even though your own personal Facebook profile.

For those who don’t know, Facebook is competing with Google / Youtube to grab a chuck of the video market share. In order to get ahead, Facebook gives an additional reach boost for people who use their in-platform features, especially for live video.

Pro Tip: You will get more reach and views on your video if you upload directly to Facebook instead of uploading a video to Youtube and then posting the Youtube link on Facebook. So if you have a music video or a live performance you want to share with your fans, upload it to Facebook in order to maximize your reach to your Facebook fans.

Because Facebook is pushing hard for their mobile live video feature, you will get a huge reach boost when you use it to stream. Here are the analytics for a mobile live video I did on Facebook Live for AstraLogik. It was probably one of their most popular and engaging posts ever, or at least within the past year. Although most people didn’t watch the entire 50-minute live stream, it reached 2,700 people organically. 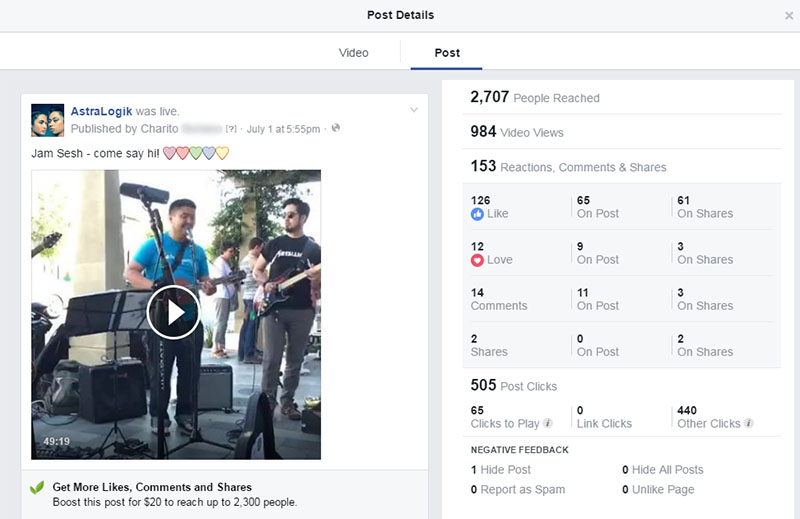 In my opinion, Facebook Live is a top priority for independent artists looking to reach and engage their fans Chances are, you’ll be broadcasting to a familiar audience of fans who already like your page, so it’s a good way to warm up to live video. It will also offer the best return for investment since Facebook is the largest social media network. Plus, when you go live, your followers get a notification to attract a larger audience.

To add to that, Facebook has announced a ton of new functions and features in the works to compete against Youtube, Periscope and Snapchat.

How to get started:

As one of the first to pioneer the mobile live video movement, Periscope is a good platform for finding new fans. Perform some songs or experiment with making new music to see how people respond. With a prominent browse and search feature, your live broadcasts can be easily found by anyone in the world through their map or listing function. Just from the way it is set up, it makes it a good tool to meet new people and potentially attract new fans.

How to get started:

My Question for You

Have you had success with using mobile live video for your music? Let me know in the comments below.

Use my affiliate link with code PARTNER10 to save 10% off your first subscription of a website or domain. Read my full disclosure for more details.